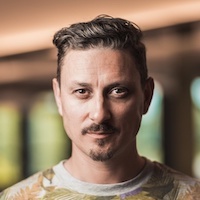 Jonathan spent 19 years as a creative director in many creative agencies like Cossette, Dare, BCP, and BBR as Executive Creative Director and then Partner. He had the honor of serving clients such as Tourisme Montréal, Toyota, the Canadian Red Cross, Molson breweries, Loto Québec, and Cadillac Fairview.

Over the years, he helped his teams to win over 250 national and international awards in the form of animals, pencils, and various misshapen letters of the alphabet.

He now spends most of his time building Ar Stories, a mobile-first, platform designed to discover spatial stories in augmented reality.

Prologue is an XR studio. We design real-time experiences for global audiences to realize the full potential of augmented reality using technologies such as machine learning and computer vision. We use emerging technology to enrich our experiences by innovating at the intersection of gaming, documentary and the physical world. Our work has been recognized by Clios® & CannesLions® for clients like Ubisoft, USA Network, and Tourisme Montreal. Ar Stories is our mobile platform designed to discover spatial stories in augmented reality. Users can enter AR portals, walk through them, interact with narrative elements, or simply experience mixed reality content that inspires movement, exploration, and shared experiences. It combines best-in-class spatial computing technologies to overlay AR content with centimeter-level accuracy, in seconds, enabling location-based experiences to be shared across different users and at different times to build Real-World AR Experiences. Whether you are an immersive creator or you work for a brand we can help you make deeper connections with your audiences and help you create gripping immersive content.