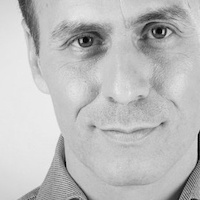 Founder and CEO at Beam Me Up

Yan is a multidisciplinary visionary, creative and expert in solving complex problems, combining for over 25 years, the fields of interactive development and artificial intelligence, with a new challenge for the last 7 years in Beam Me Up Labs, to accelerate and support critical decision making and counter misinformation, by combining neuroscience, biometrics and telemetry for the improvement of the well-being, performance, skills and user experiences of individuals, teams, groups or populations.
A serial entrepreneur, he has managed up to 300 employees and set up satellite offices in Europe and Asia, as well as partnerships with several international giants.

Yan first founded Enzyme Digital Marketing in 1994, a company specializing in game development, special effects and 3D animation, which later merged with ICE, a major Canadian video game distributor and publisher, where he assumed the role of Vice President of Business Development before creating Enzyme Testing Labs in 2002.

As President and CEO of Enzyme Labs, which was sold in 2016 to Keywords Studios (KWS), Yan established the company as one of the world’s top multilingual video game testing labs.

As a friendly and energetic executive, Yan is known for his creative vision for disruptive innovations, in addition to being an excellent motivator of people inside and outside his organization.

He was a 2006 Erns & Young Entrepreneur of the Year finalist (Media & Entertainment) and led his team to win numerous competitions including Best Canadian Solution and Top 10 finalist at the NATO Innovation Challenge Fall 2021.

BMU team is dedicated to improving the human experience as well as behavioural and cognitive performance of individuals and their team. We offer a solid expertise in biometric measurements, coupled with Artificial Intelligence (AI) and Biofeedback, as well as a ready-to-deploy multi-sensorial analytic platform integrating an ever-growing number of intelligent assistant agents’ modules.